Buffalo Airways was the subject of the History television reality series Ice Pilots NWT. We have operated our own courier service, Buffalo Air Express, since 1982. It is the largest courier service in the Northwest Territories providing a door-to-door network with over 400 communities in Northern Alberta. By working with the Global Interline Network, we are able to ship nationally and internationally from our bases in Yellowknife, Hay River and Edmonton. 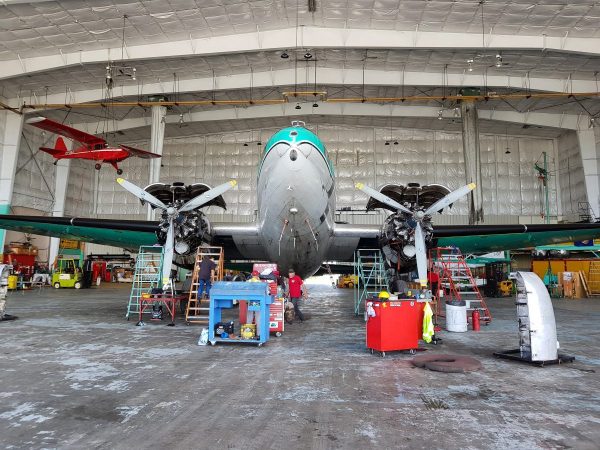 In 2004 under the management and creativity of Mikey McBryan Buffalo Airways launched a merchandise and clothing company Buffalo Airwear. The clothing line includes accessories, hoodies and hats, carefully curated and shipped right from the Buffalo Airways hangar in Yellowknife.  Due to the success of Ice Pilots NWT, we were able to expand our merchandise line to up to more than 80 different products. Shop online at www.BuffaloAirwear.com.

In 2012 the canadian TV Show Arctic Air used Buffalo Airways hangar for scenes in their show. Later in that year Bruce Dickinson, lead singer of Iron Maiden, visited our hangar in Yellowknife and flew our Douglas DC-3 C-GWZS, the last commercially flying DC-3 from D-Day. In 2018 and 2019 “Buffalo Joe’s” son, Mikey McBryan, has bought an abandoned Douglas DC-3 in St. Hubert, Quebec and has restored the aircraft back to flying condition within only two months of time, finishing the project with a successful test flight on June 6th, 2019 (D-Day). This story was captured and followed along in the YouTube Show “Plane Savers”.